Isaac Callan GlobalNews.ca
May 23, 2022  4:00 am
WATCH: With the election less than two weeks away, new polling from Ipsos done exclusively for Global News shows Ontario’s PCs continue to have a tight grip on the provincial election race. Erica Vella has more.

With less than two weeks until polling day, Progressive Conservative Leader Doug Ford continues to hold a commanding lead over his rivals.

A new poll, conducted exclusively for Global News by Ipsos between May 17 and 19, found the PCs were leading across many key demographics and Ontario regions.

Mike Schreiner’s Green Party would receive six per cent of the vote, with five per cent indicating they would cast a ballot for another party. The rate of people who would not vote sat at six per cent of those polled, with 13 per cent undecided. 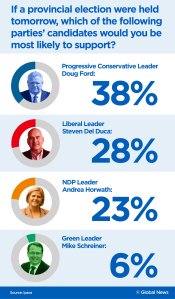 “The opposition parties have not been able to set up issues that can fracture the coalition that the Progressive Conservatives seem to have at the moment,” Darrell Bricker, CEO of Ipsos Public Affairs, told Global News.

“Clearly this is not an issues-based campaign at the moment. It is really one about whether people prefer the incumbent over the other options and whether or not they feel it’s time for a change.”

Party leaders clash over affordability, healthcare and environment during debate

Support for the PCs has dropped just one percentage point since the campaign began, while the Liberals have picked up two points. The NDP are down two points and the Greens are up by one.

The poll comes one week after Ontario’s four party leaders clashed during a televised debate. The TV event was streamed online, carried on radio and across TV channels in the province.

Doug Ford and the PCs have also maintained a healthy approval rate during the campaign, the Ipsos poll suggests.

More than half — or 52 per cent — of people approve of the performance of Ford and his party. The poll shows 15 per cent strongly approve and 37 per cent are somewhat supportive of the PC record.

Indeed, 41 per cent of those polled believe the PC government has done a good job and deserves to be re-elected, the Ipsos poll shows. Fifty-six per cent believe it is time for change.

The positive PC numbers are both up one percentage point since the start of the campaign.

Ford and the PC Party lead, or sit at second, in every Ontario region polled.

In the crucial GTA-905, the PCs hold a commanding lead of 14 percentage points above the Ontario Liberal Party, which is in second place. The Ipsos poll indicates the PCs would receive 44 per cent of the vote, with the Liberals on 30 per cent and the NDP on 17.

The Greens would draw five per cent of the vote in the 905 and four per cent would go to other parties.

In Toronto itself, the 416 area, the Ontario Liberals hold a slim lead over the PCs. Del Duca’s party polled at 32 per cent support, compared to 30 per cent for Ford’s Progressive Conservatives and 25 per cent for Horwath’s NDP. The Greens registered eight per cent support and four per cent went to other parties.

“It’s a low intensity campaign,” Bricker said. “People don’t feel a strong desire to get at this government, at least not enough of them in the right places that cause a change in government.”

Ipsos also found the PC Party leads among both rural and urban voters. A majority (53 per cent) of rural voters would cast a ballot for the PCs, compared to 20 per cent for the Ontario Liberals and 16 per cent for the NDP, the poll found. The Greens reported four per cent support, with seven percent considering another party.

A total of five per cent would support another party in urban settings.

The road to Queen’s Park: parties divided on highways, united on transit

Other geographic areas in the province break down as follows:

NDP out in front with young voters

Age-based breakdowns tell a similar but not identical story.

The PC Party leads among voters aged 55 or older, the Ipsos poll found. It indicated that 49 per cent of the 55-plus age group would vote for the Progressive Conservatives, compared to 28 per cent for the Liberals and 16 per cent for the NDP. Other parties gained seven per cent support.

The election will be held on June 2 and advanced polls opened on May 19.

METHODOLOGY: This Ipsos poll was conducted between May 17 and May 19 on behalf of Global News. For this survey, a sample of n = 1501 Ontarians aged 18+ was interviewed online (1,001) and by telephone (500). Quotas and weighting were employed to balance demographics to ensure that the sample’s composition reflects that of the population according to census information. The precision of Ipsos online polls is measured using a credibility interval. In this case, the poll is accurate to within ± 2.9 percentage points, 19 times out of 20, of what the results would be had all Ontarians been polled. All sample surveys and polls may be subject to other sources of error, including, but not limited to coverage error and measurement error.