With summer just around the corner, one research group in Halifax had an important question to ask Canadians: What is your favourite ice cream?

The survey says chocolate was the top pick on average in the country, though it’s closely followed by vanilla and mint chocolate.

Narrative Research said among the 1,239 Canadians they surveyed online between April 12 and 19, about 13 per cent chose chocolate as their number one flavour. Eleven per cent went with vanilla. 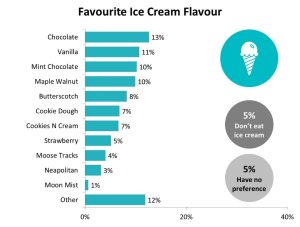 The two loved flavours were most preferred by men and by Quebec residents.

New Brunswickers liked butterscotch the most, though it came in fifth on the overall scale.

Moon mist, a galaxy-swirled combination of grape, banana and bubble gum flavours, was last on the list with one per cent of respondents choosing it as the best flavour. But for Nova Scotians, it was the best-seller.

The mentions of maple and butterscotch increased with age, it said, while “preference for cookies and cream flavoured ice cream decreases with age.”

The survey also found that five per cent of Canadians don’t eat ice cream, while another five per cent don’t have a flavour preference.