Editor’s Note: This story’s headline previously said the engine stalled, however the TSB said the plane experienced an aerodynamic/wing stall. The story has been updated.

The Transportation Safety Board says an amateur-built float plane stalled while making a turn south of Edmonton last summer before crashing and killing all three people on board.

The Murphy Moose four-seat aircraft, which has wheels that extend from its floats, was being used for seaplane training on July 3, 2020 and carried a licensed pilot, a trainee and a passenger.

The plane took off from the Cooking Lake Aerodrome around 10:40 a.m. and touched down briefly on the nearby Hastings Lake, before continuing to the southwest. 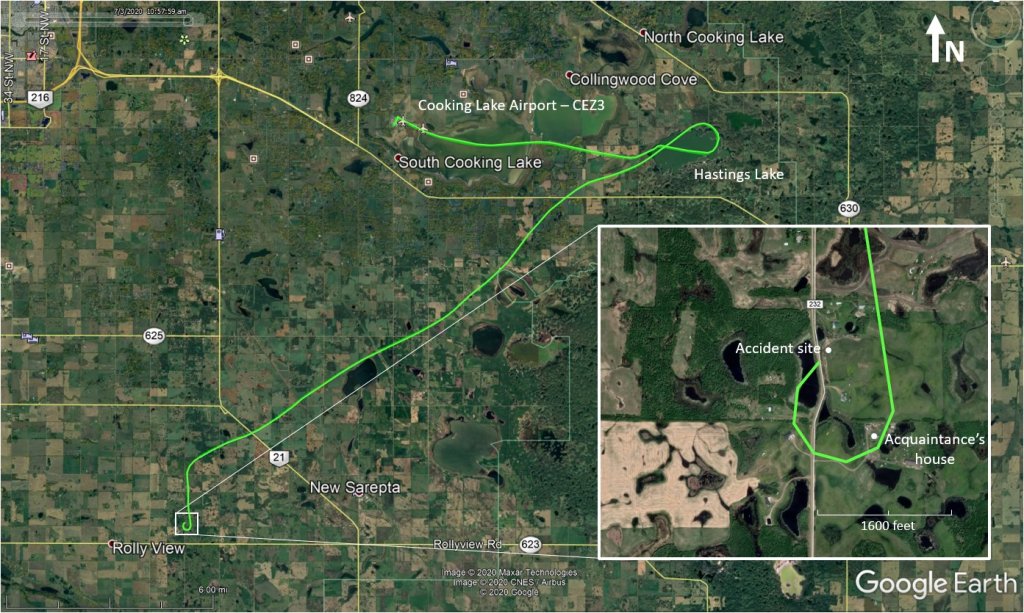 About 10 minutes later, the aircraft was making a turn over property owned by an acquaintance of the training pilot, during which the plane’s speed dropped to 150 km/h from 188 km/h.

The safety board said the plane stalled out and went into a spin.

“An aerodynamic stall occurs when the wing’s angle of attack exceeds the critical angle at which the airflow begins to separate from the wing,” The TSB report said.

“When a wing stalls, the airflow breaks away from the upper surface, and the amount of lift generated is reduced to below that needed to support the aircraft.”

The plane was only about 400 feet above ground at this point, and nose-dived to the ground.

Steep turns increase the risk of an aerodynamic stall, which the board says when made close to the ground, the chances of successfully recovering from a stall decrease.

#FlightSafety #Reminder: Additional vigilance & caution are required when maneuvering close to the ground to prevent loss of control from a stall/spin (autorotation) when an aircraft is not equipped with a stall warning device. https://t.co/nDgNcljw38 pic.twitter.com/Ma4cWzmvLv

The plane crashed into pastureland along Highway 623 near the hamlet of Rolly View, 12 kilometres east of the Edmonton International Airport.

The aircraft was destroyed and everyone on board killed. The investigation wasn’t able to determine which pilot was at the controls at the time.

The report said over the course of four years, the two pilots had flown more than 40 hours together in that aircraft, including eight hours of seaplane rating training between June 16 and July 3, when the crash happened.

The Murphy Moose aircraft was built in 2004 and up-to-date on its annual inspections, the TSB said.

“The aircraft had no known deficiencies before the occurrence flight. There were no indications that the engine was incapable of producing power. Additionally, recovered engine data indicated that engine rpm and oil pressure were maintained until impact. The post-accident aircraft examination did not reveal any defects with the flight control system. The aircraft was not equipped with any stall warning devices.”

The full report into the crash can be read here.