Christie Brinkley, country singer Lauren Alaina, Hannah Brown of The Bachelorette and former White House press secretary Sean Spicer are among the contestants on the next season of Dancing with the Stars (DWTS) — but not everyone is happy with the list.

ABC announced the celebrity lineup Wednesday for Season 28 on Good Morning America, which kicks off Sept. 16.

Spicer quit as press secretary just six months into U.S. President Donald Trump’s presidency. He had a contentious relationship with the press and is remembered for his highly contested statement that the president’s inauguration was the most widely seen in history.

Spicer’s addition to the upcoming season didn’t go down well with co-host Tom Bergeron, who tweeted that he earlier told producers he hoped the new season would be a “joyful respite from our exhausting political climate.”

He said during a lunch with the DWTS’ new executive producer, everyone was in agreement after he urged them not to have any “divisive bookings from ANY party affiliations.”

“Subsequently (and rather obviously), a decision was made to, as we often say in Hollywood, “go in a different direction,” Bergeron wrote.

He continued: “It is the prerogative of the producers, in partnership with the network, to make whatever decisions they feel are in the best long term interests of the franchise.”

“We can agree to disagree, as we do now, but ultimately it’s their call.”

“I’ll leave it to them to answer any further questions about those decisions. For me, as host, I always gaze into the camera’s lens and imagine you on the other side, looking for a two-hour escape from whatever life hassles you’ve been wrestling with,” the DWTS co-host wrote.

READ MORE: Adam Rippon talks ‘Dancing with the Stars: Juniors’ and the challenges he faces as a judge

“That’s a responsibility, which I take very seriously, even if I occasionally season it with dad jokes. Hopefully, when Erin Andrews and I look into those lenses again on September 16, you’ll be on the other side looking back, able to enjoy the charismatic pro dancers, the unpredictable judges and the kitschy charm that has defined DWTS since 2005,” he concluded.

Some thoughts about today pic.twitter.com/aCQ4SHrGCI

In a change from previous seasons, viewers won’t learn the celebrity-pro pairings until the season premiere.

People on Twitter were not happy about Spicer’s casting — including Big Bang Theory co-creator Bill Prady — and #BoycottDWTS began to trend after the announcement.

Sean Spicer lied repeatedly to the American people and literally defended Hitler. @ABCNetwork: “Yes, but can he fox trot? Tune in to see!”

You don’t deserve to feel joy

#BoycottDWTS You should be ashamed of trying to rehab his image. Do you care about your country? Or just ratings?

Nope! No more DWTS or ABC in my house. Sean Spicer lied the American public daily. He isn't worthy of the exposure. #BoycottDWTS

Not only did Sean Spicer lie to the American public on a regular basis, but he spoke to journalists in the most condescending and demeaning way imaginable. Why would any legitimate broadcast company want anything to do with him? #BoycottDWTS

@DancingABC did you bump your head? @seanspicer should not profit from his abhorrent treatment of news people and the American belief in freedom of the press. No longer a fan. #boycottDWTS

Spicer responded to the backlash on Thursday while speaking to CNN.

“I think this is an entertainment show. I look forward to having some fun. And if people are looking for news, I suggest they tune into a news program,” Spicer told CNN. “I am very happy with who I am and who I support. I’m not changing. I am giving people another opportunity to see a side of me that is different.”

WATCH BELOW: Sean Spicer tells Kimmel he had a special alert on his phone for every time Donald trump tweeted

In response to Bergeron’s statement, Spicer said: “I think Tom has been a great host. And I firmly believe when the season is over he’s probably going to realize bringing a diverse group of people together, who can interact in a fun, civil and respectful way, is actually a way we can move the country forward in a positive way.”

“And it will make this show an example of how Americans can disagree about politics and tune into good entertainment shows and keep their politics at bay,” Spicer said.

In an interview with Access on Wednesday, Brown revealed that he was “most excited to meet” Spicer.

“People would look at us and think that we’re polar opposites,” Brown said. “But I’m a big believer that if you can talk to someone and meet in the middle you can learn about each other and help each other both grow.”

He also shared that he and Spicer had been in conversation “all day” on Wednesday and referred to him as a “good guy, really sweet guy.”

Many people shared their thoughts on Brown’s comments.

Brown responded to a Twitter user who wrote, “I’m actually disappointed in @Karamo for lending his celebrity to this.”

“First, I have no say who is on the cast and didn’t find out till this morning that he is on! But I’ll tell you this…,” Brown wrote. “I’m excited to sit down w/ him and engage in a respectful conversations. Only way things get better is if we try to educate those who have different POV than us.” 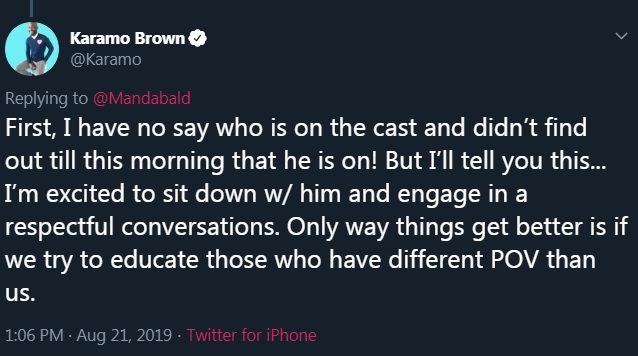 —With files from the Associated Press