WATCH: Here are several types of drugs that are making its way to Canada and where they are being shipped from.

Fentanyl originating from China, heroin sent from east Africa, and anabolic steroids from Moldova. Documents obtained by Global News show where these illegal drugs and more are being trafficked from.

The documents also offer a look at how the scourge of fentanyl and synthetic drugs like GBL (the precursor for date rape drug GHB), which mainly originate from China, have increased dramatically since 2014. The report notes that outbound drug seizures are included in the final numbers and in some cases the “transit” category may also refer to origin countries in some instances.

And while the opioid crisis continues to spread across Canada, the seizures of other drugs like cocaine and opium have also quietly increased in recent years.

Here are nine maps that show where and how illegal drugs are flowing into Canada. 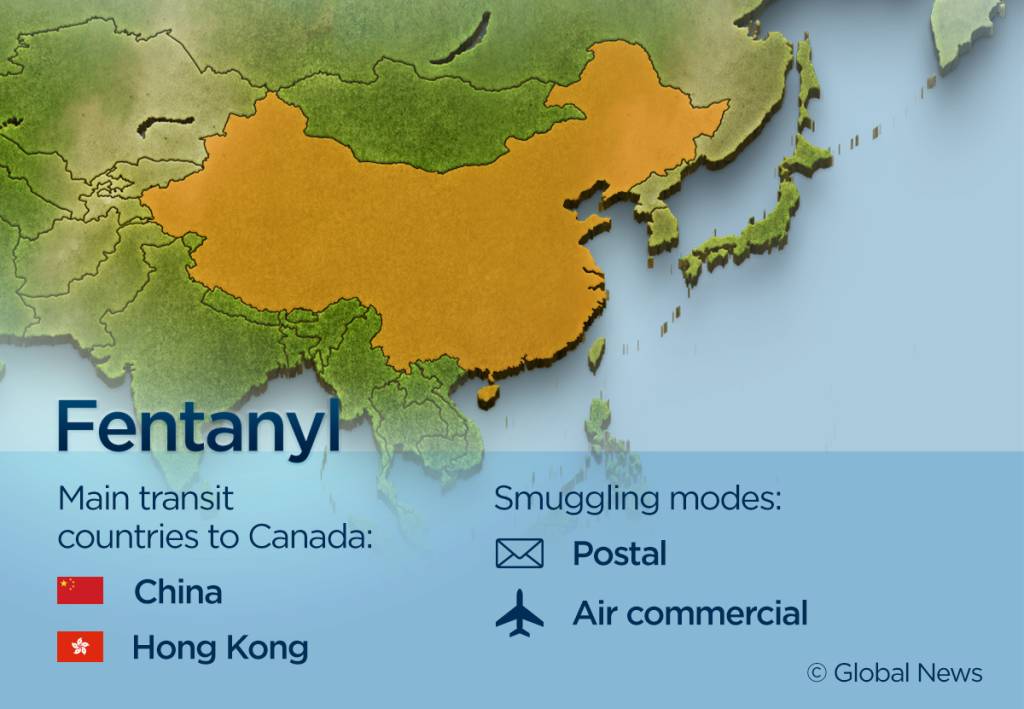 Provinces across the country have faced a spike in drug overdose deaths in recent months, including B.C. which saw 25 deaths and nearly 600 overdoses in June alone. Many of those deaths are attributed to illicit fentanyl, which can be 100 times more powerful than morphine.

New numbers from the CBSA show roughly 205 kilograms of fentanyl was discovered by border officials in the fiscal year 2016-2017.

WATCH: Ontario doctor who lost everything speaks out on fentanyl addiction ahead of sentence

According to the CBSA, “China accounts for nearly 100% of seizures” which are largely delivered through the mail. The agency says the drug is “pressed into pills domestically, cutting costs and risks to local traffickers.”

“It is conceivable that fentanyl supply lines could expand to include Mexico-sourced fentanyl products,” according to the CBSA.

In 2016, more than 2,400 Canadians died of opioid overdoses, according to an estimate from the Public Health Agency of Canada, which said the number is likely much higher.

The surging number of deaths has led to health agencies and governments at all levels rushing to address the growing crisis. In November 2016, the RCMP and China’s Ministry of Public Security announced an intelligence sharing agreement aimed at curbing fentanyl and other synthetic opioids from entering Canada. 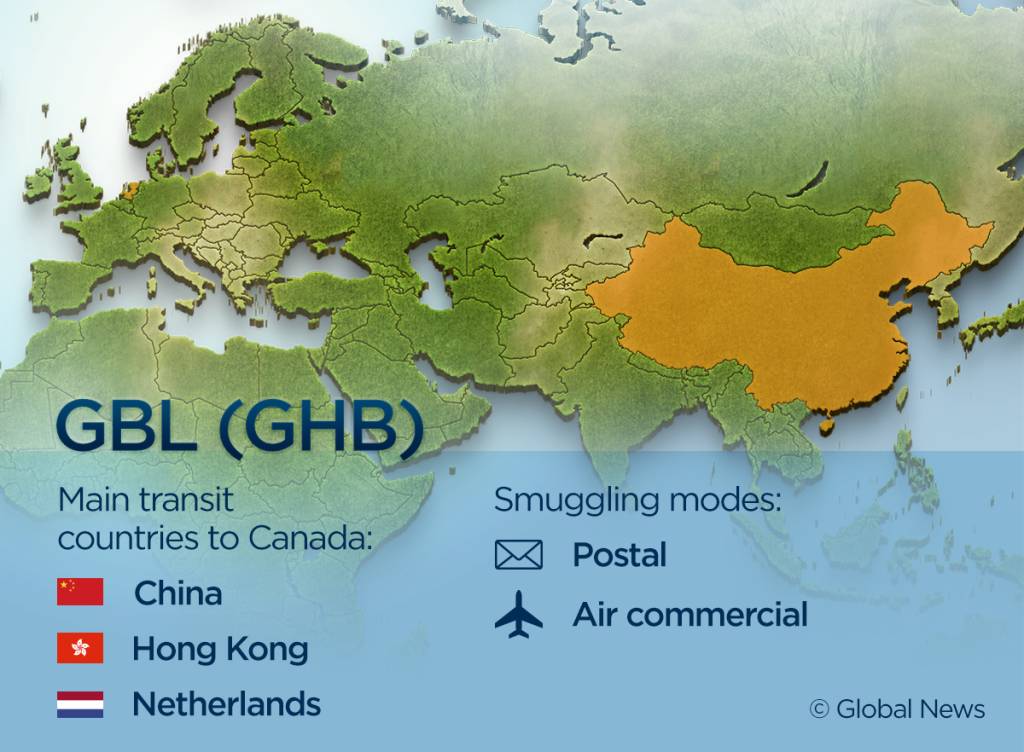 “GBL quantities seized in 2015 have significantly increased by 194% as the drug’s popularity as an alternative for alcohol and other drugs,” according to a CBSA document. “GBL can be easily and legally sourced through the Internet, is consumed by a diversified clientele and has a high profit margin once converted to .”

The agency says GBL is transported to Canada mainly via the mail and warns that seizures will increase given its popularity as a party drug.

“GBL may gain additional popularity with traffickers, given the high profit margin and that the process of converting GBL to GHB is simple and does not require complex laboratory equipment. 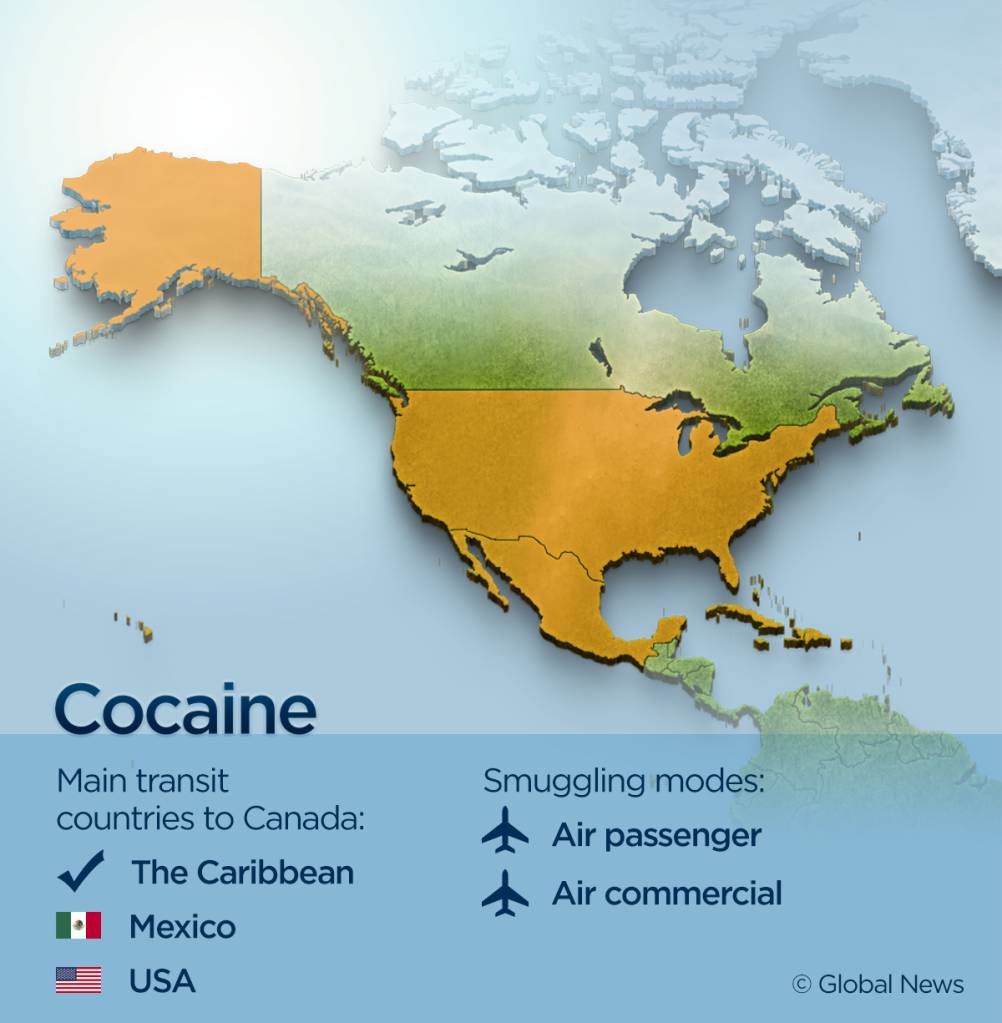 The majority of the world’s cocaine is produced in just three Andean countries — Colombia, Bolivia and Peru— but its main points of entry into Canada are from the Caribbean islands, the U.S.A. and Mexico, according to the CBSA.

Shipments being smuggled by travellers at airports or in packages on commercial flights remain the most popular modes of transportation, according to the agency.

“Seizures from 2010 until 2015 have remained relatively stable ranging from 300 to 420, and quantities have hovered around 1,000 kg,” the CBSA document said. In 2014, the quantity of cocaine seized spiked to more than 2,300 kilograms thanks to five large marine busts.

The CBSA also found a 35 per cent increase in cocaine quantities arriving from the Caribbean islands, mainly Jamaica and the Dominican Republic.

Cocaine is the second-most commonly used illegal drug in Canada. In the fall of 2016 health experts raised the alarm over a 40 per cent increase in the amount of street drugs that tested positive for fentanyl. 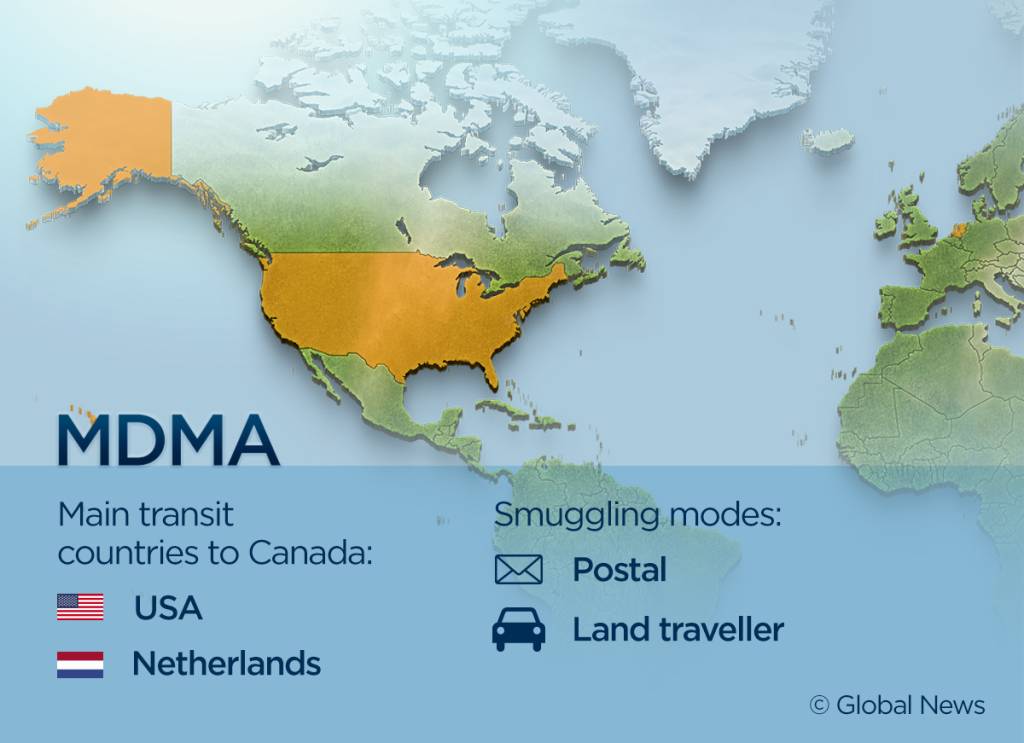 Seizures of the drug MDMA, commonly known as ecstasy, increased dramatically between 2014 and 2015, according to the CBSA, with main transit points being the U.S. and Netherlands.

The mail is the most commonly used method of importing MDA, followed by land and air modes.

Canada has become a known source of the drug, according to the agency, and in 2015 there were significant seizures at “sophisticated” domestic labs across the country, run by organized crime groups.

“Asian organized crime groups are often active in cross-border smuggling of large quantities of MDMA between Canada and the U.S. as well as in the importation of precursor chemicals from source countries such as China, India and Vietnam,” a CBSA report said. 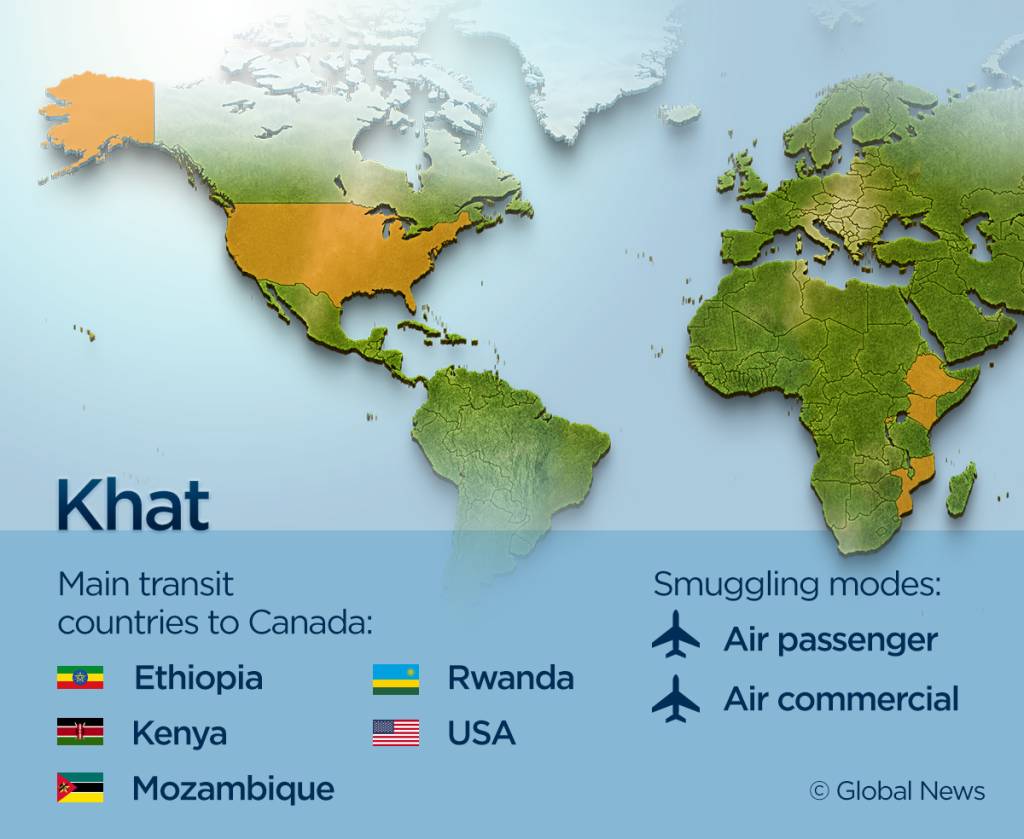 Pronounced “cot” or “chat,” khat is a plant native to East Africa and the Arabian Peninsula. Users chew the leaves to produce a mild feeling of euphoria or excitement.

The drug is mainly smuggled from countries in East Africa, like Djibouti, Kenya, Ethiopia and Somalia, via postal and courier routes.

The CBSA noted a nearly 49 per cent decline in the quantity of the drug coming into Canada between 2014 and 2015. 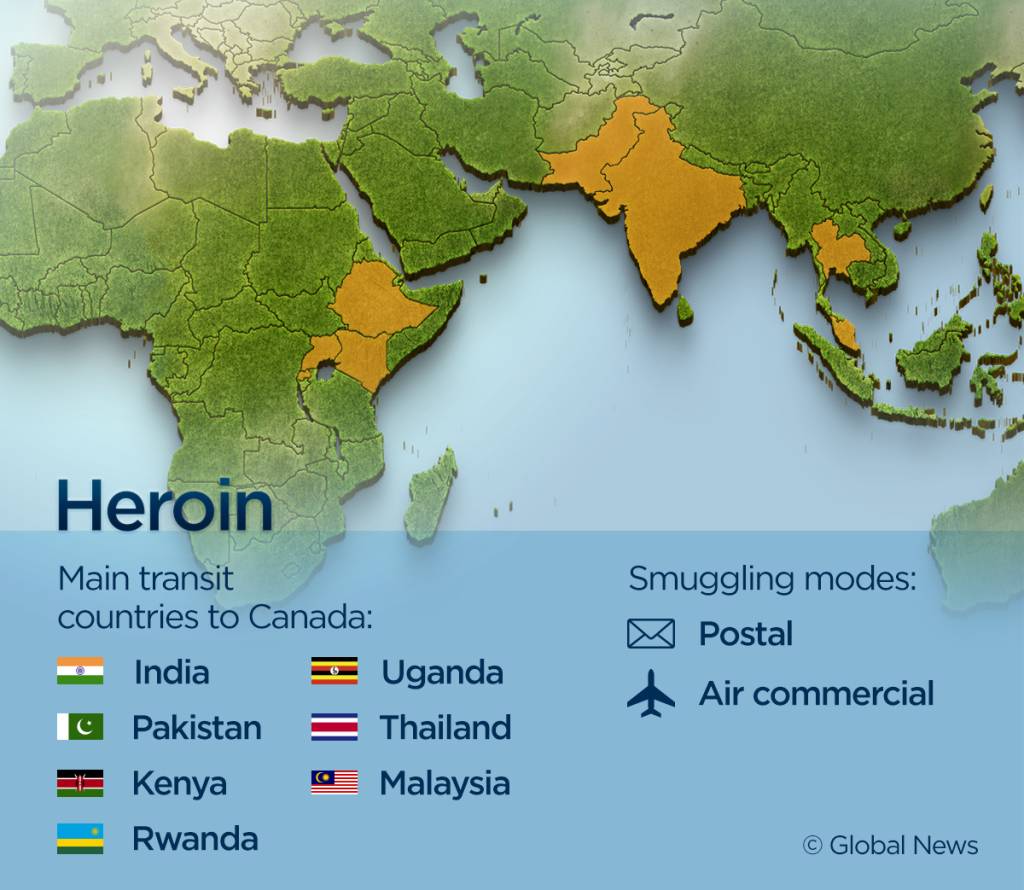 More than 200 kilograms of heroin were seized by Canadian border agents in 2015, with India, Pakistan, Malaysia, and countries in east Africa like Tanzania, Kenya, Rwanda, and Uganda being key transit points for heroin that is largely produced in Afghanistan.

“Heroin is emerging as the drug of choice due to being cheaper and more easily obtainable than prescription opioids,” a CBSA report warned, noting that a surge in heroin “directly coincides with shrinking street supplies of OxyContin.

Ontario health officials believe heroin laced with illicit fentanyl is responsible for a number of deaths in the province over the last week. 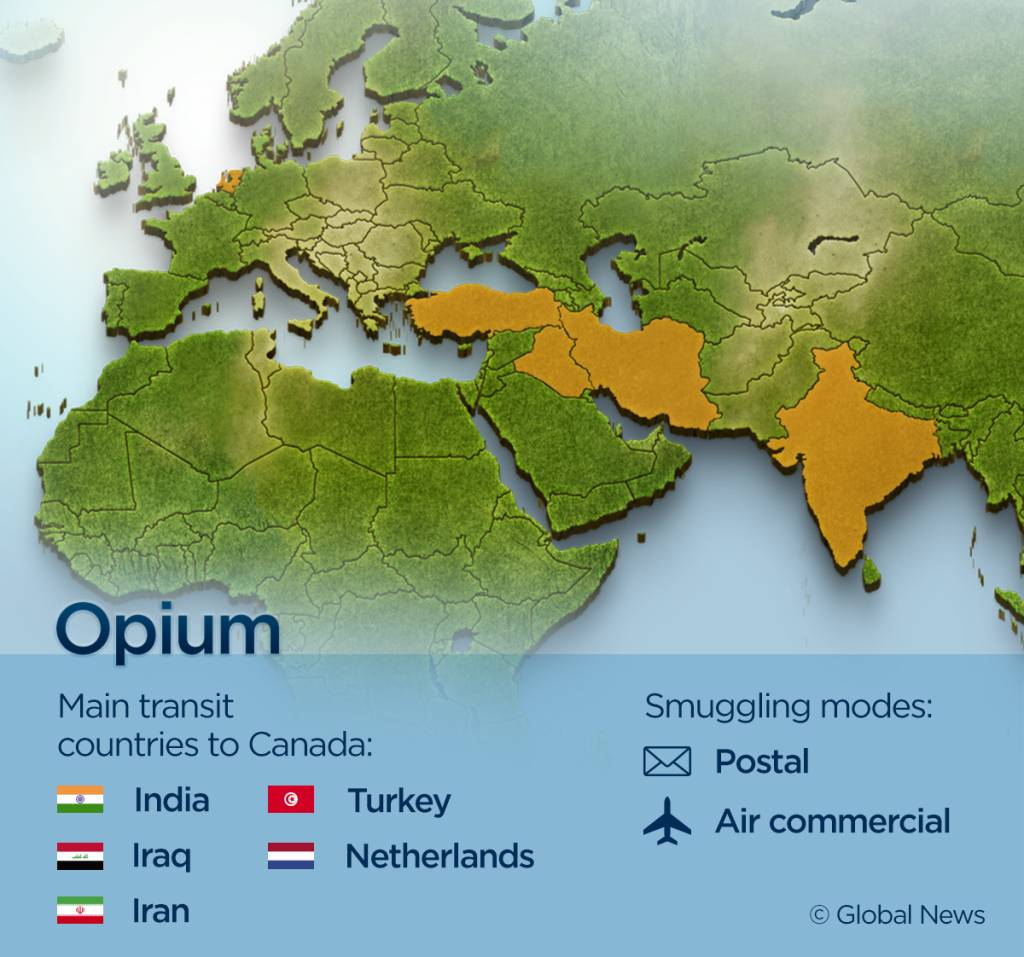 Opium seizures in Canada rose by 31 per cent from 200 kilograms in 2014 to 262kilograms in 2015, with India, Iran, Iraq, Turkey and the Netherlands as the main trafficking routes, according to the CBSA.

“Due to record high opium crops and a steady increase in quantities since 2012, opium seized in 2016 will likely be higher than 2016; however seizures numbers will remain stable,” the CBSA said.

New numbers from the CBSA show nearly 320 kilograms of opium was confiscated from 2016 to 2017.

The agency noted that the opioid crisis is also a contributing factor in the quantity of opium being sent to Canada. 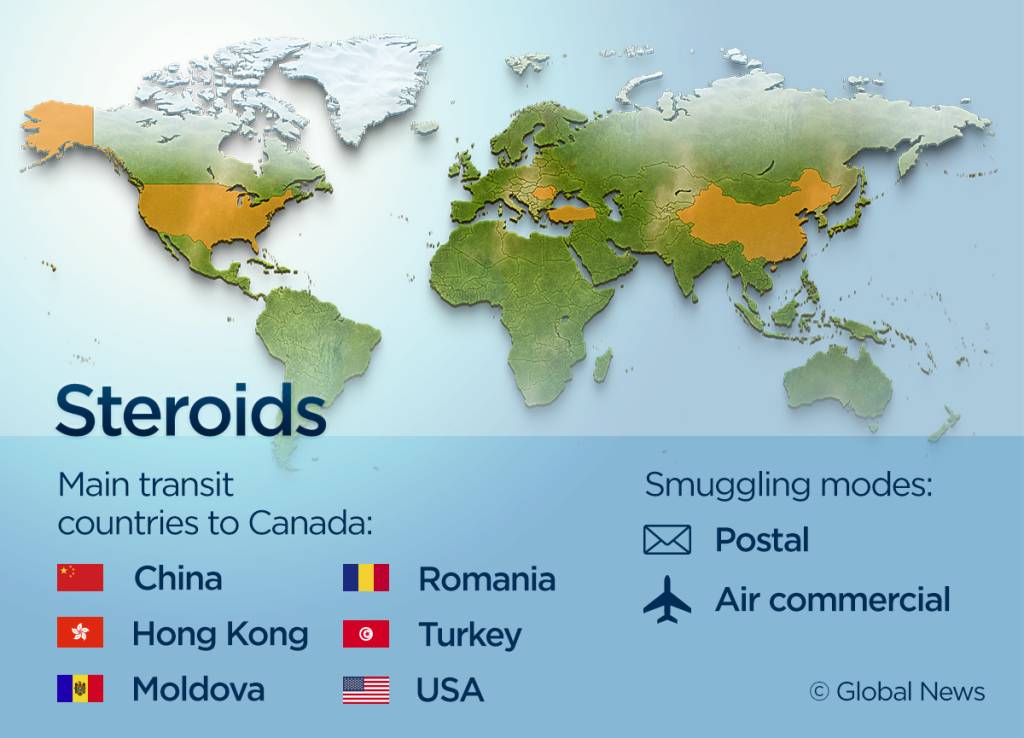 Nearly 200 kilograms of illegal steroids were seized by the CBSA in 2015, up from 180 kilograms in 2014, with China, Hong Kong, Moldova, Romania, and the U.S. being the main transit points, according to a CBSA report.

The CBSA notes that while most anabolic steroids are smuggled into Canada via the mail system, ingredients for producing steroids can be found on the internet or “diverted from legitimate sources.”

“Anabolic steroids have a stable consumer market that shows no signs of diminishing,” a CBSA report said. 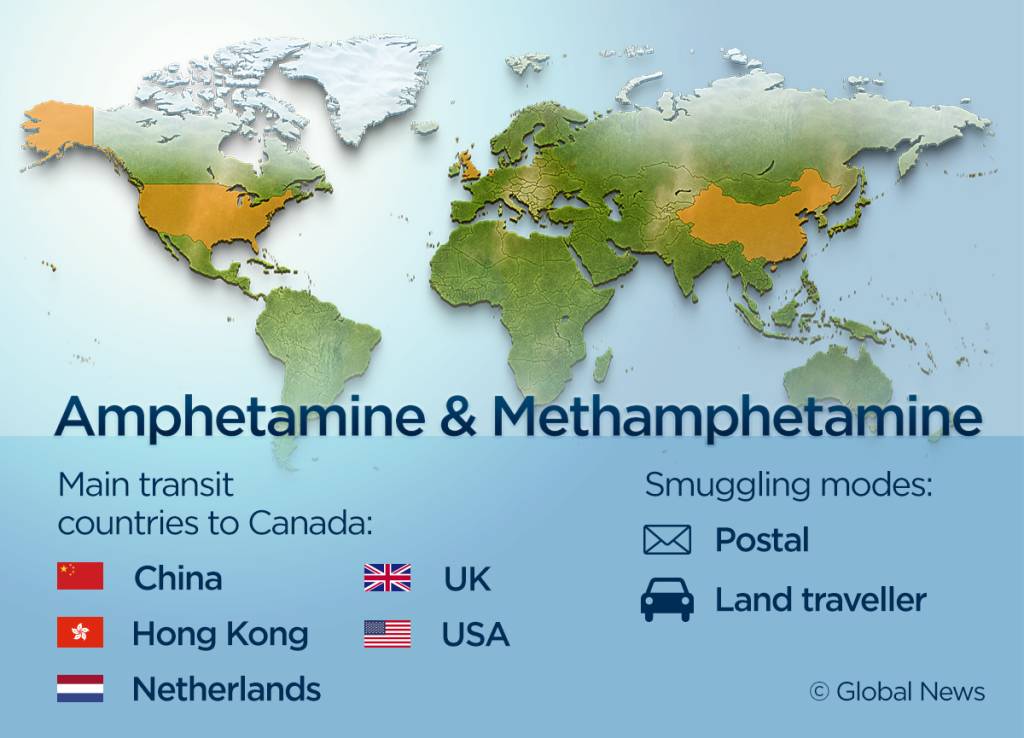 The number of amphetamine seizures has increased by 35 per cent while quantities seized have decreased by 42 per cent between 2014 and 2015, according to the CBSA.

“The abuse of clandestinely produced amphetamines has spread,” a CBSA report says. “Despite an ongoing domestic appetite for amphetamine, due to extensive production of the narcotic in Canada quantities seized are not expected to increase in 2016.”

The postal route still is preferred among traffickers in Canada with the U.S., China, the U.K. and the Netherlands being main transit points.